A few months ago, we were studied about the Gender equality and equity. Our literacy assignment was to write our experiences or research on the gender in Cambodia. And this is my work.

Put Myself Inside Her High Heels

In Cambodia, there is only one word for people who identify as bisexual, gay and transgender – gay. There are no real names to identify the spectrum of LGBTQ. Due to this lack of language, transgenders are often negatively targeted and only recognized as “gay.”

The transgender community has faced discrimination and oppression as well as physical and verbal abuse. According to the survey from Cambodian Center for Human Rights out of four different provinces,  92% of the interviewee experienced verbal abuse, 43% experienced physical violence, 31% sexual assault, and 25% were raped.

Since I was born in a local community that has a large population of transgenders; I usually see them in the wedding establishment or in the market. I remembered one day when my mom took me to Takeo Market. I saw a 1.75m beautiful woman who walked confidently with her high heels, which is about 12 cm passing by the road. “See that gay person, it looks like a pillar,” said the seller, “I don’t know how much did that gay spend to change itself. How useless, there is no future for that person.” I heard those conversations from one of the sellers that sells me vegetables. And It keeps me wondering how the woman managed to hold her smile knowing the criticism from others in the market.

It is very agonizing that people don’t accept them. However, there are transgenders who are trying to break the gender stereotype. Popi or also known as Leang Sothea won the Crowned Cambodia’s first transvestite beauty queen in 2001 has become the first known transgender. Popi first realized that she loved man at the age of 8 and at the age of 16, she started to wear “women clothes”. She claimed in the Phnom Penh Post that before she became famous, “ [she] was in a real dilemma; men didn’t like [her], and women didn’t like [her].” But there is nothing wrong with her because “It is [her] inclination by nature” that she is born with a woman’s heart. In 2006, she did a sex-change operation and became a popular transgender MC on the television. Moreover she “enjoys reading fashion catalogues, “hair decor” and excursions to the seaside, she is not just another pretty face.”

Popi has the stamina to archives her goals, but there are others that have not had this chance. They need support and appreciation from their family, friends, and society to be able to step up and be proud of who they are. However, this notion is not yet popular in Cambodia. The process of acceptance maybe slow, but necessary. We must all put ourselves in her high heels and recognize empathy is the key to understand.

A story with different perspectives is interesting. Authors with unique personality change the event and character characteristics throughout the whole story in one blink.

October 31st, 2017 is the Halloween day. There are seven people who write the story. We take 3 minutes each and then past the story to other to continue.

At last, I edit the grammar and add some words to make the story make sense. This is the result.

I meet my Yin

As I carefully entered the haunted house, the door shut behind me and I see myself eating my own mom. A half red-blue eyes poison my throat. I choke my own oxygen because of the putrid girl pearls the head and grabs the brain; she slowly put them in the month. She is purely gross! It’s so repulsive that I instantly scurry to that villainous disgusting eerie girl and kick strongly on her bloodcurdling stomach. I run past her to find the way out.

END_OF_DOCUMENT_TOKEN_TO_BE_REPLACED

Being a short person in a group of the basketball players isn’t a good idea. I hate running and getting sweaty. I don’t like to do exercise, I was not that healthy. However, this sport helps me to build a healthy body. I drink a lot of water and eat a lot of food without worrying too much about calories. Basketball also makes me have a strong mind, being patient, and create a good teamwork. Even though I am the shortest in my basketball team, I can take my fast speed advantage to make the scores.

Writing the sentences with corrects verb tense is very important. It uses to recognize the situations is happening in the past, future or present. Because English is our second language and our language (Khmer) doesn’t have the words that change into past tense, it’s really hard to learn and remember the concept.

To practice writing things in past tense, we have a document called “Journal” where we pick a topic to write include the challenge ( 15 verbs in past tense).

This is one of my Journal.

I was afraid of the ghost since I was young. My cousins really liked to scare me when I visited them on the holiday. One day, I went to my grandmother’s house because she was sicked. The sky was so dark and only the big red moon appeared. The dogs barked along the wind that blew across the driving road to the pagoda. The light turned off because of the thunder and lighting. The only thing that luminated the house was the red candles. I stayed in the middle of 8 shadows of my relatives. There were my father, mother, aunt, uncle, grandmother, and the other 3 cousins. No one had a chance to sleep because the kids were afraid of ghost including me. My cousins wanted my father to tell the ghost story. Then he began with many types of ghosts.

END_OF_DOCUMENT_TOKEN_TO_BE_REPLACED 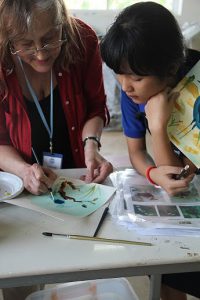